«Before I Die” Wall

The idea of the “Before I Die I Want To…” Wall comes from Candy Chang, who in her book says her motivation for doing so was understanding well the life stage that is normally evaded (death) and using it as a reflection for the things that each person would want to do with the rest of their life (the website for this initiative- http://beforeidie.cc). This wall was put together for the first time in New Orleans and has been reproduced in more than 200 cities around the world since, following the detailed that the project’s organizers describe on the webpage (see http://beforeidie.cc/site/build-your-own-before-i-die-wall/)

For more information, visit this link.

Implementation of the Safe Route to WUF7 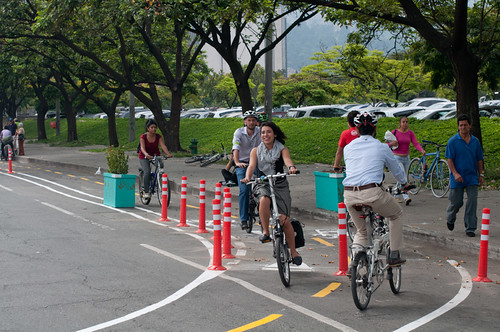 As part of our work with UN Habitat and to support the improvement of non-motorized transport in the Metropolitan Area of the Aburrá Valley, we implemented along with AMVA (the government of the Metropolitan Area) a Safe Route to the World Urban Forum which improved conditions for those arriving by bicycle to the Forum and beyond. If you want to see more information, look for the hashtag #Rutasegurawuf7 on Facebook and Twitter. There are also some blog posts on the subject (one from the Interamerican Development Bank and one from Pardo in El Tiempo), and even videos! For the full report, click here. 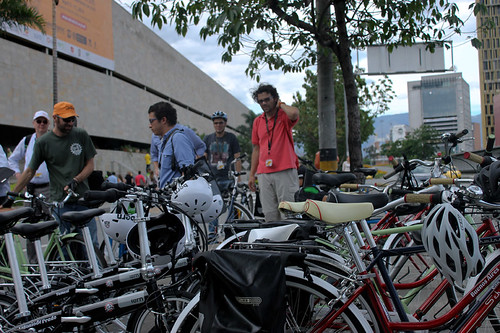 The main goal of the Safe Route experiential tour was to present the route in a formal way to the WUF attendees, including officials from UN Habitat and ITDP, among others. We presented and explained to them the development of the project from the installation of bike parking in the Plaza Mayor to the different stages of the Route’s implementation; convening the community, painting the bike lane, painting the flowerpots and bollards, seeding the plants, among others. At the end of the tour, the attendees were grateful for the tour and for Medellin’s initiative to provide such spaces for cyclists. For more information, follow this link. From April 11 to 16, we had the opportunity to bring a group of people to visit the most important transport projects in Medellin, Bogota and Pereira. We went to all the existing mass-transit systems in these cities and rode bikes, visited public works. If you are interested in participating in one of our next technical visits, you are welcome! To see the full report, click here.